The village of Montánchez is famous for its hams, pork shoulders and charcuterie products. It is located in the mountain range of the same name, at an altitude of 1000 meters, in the heart of Extremadura, amid the magic triangle formed by the monumental cities of Cáceres, Trujillo and Mérida. Montánchez’s altitude, as well as its cold and dry microclimate, are unique for the natural curing of hams and have made this locality become one of the three most important Spanish centers in the elaboration of Iberian ham, together with Jabugo and Guijuelo. 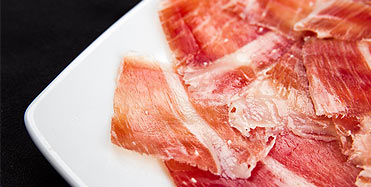 THE KING OF THE MEDITERRANEAN DIET

Iberian ham shines brightest among the rich and healthy foods of the Mediterranean diet, being the most appreciated Spanish product in the whole world. During the curing process, the grease passes through the muscle tissue, giving the ham its characteristic “streakiness” as well as a high-quality aroma and flavor typically craved by the most exquisite palate. Even in the 1236 code of laws of Montánchez there were extracts about the existence of pastures devoted to the production of acorns to feed the herds of pigs. Furthermore, it is a well-known fact that Emperor Charles V always had a ham from Montánchez handy, which he did not stop “nibbling” at throughout the day for relaxation and enjoyment.